Genre: It is a song that fuses musical culture and genre into something that is unique and powerful; pop folk meets world music with an experimental edge.

This song marks the last single that Chloe will be releasing before she releases the album later this year.

Where the wild people go is a song that celebrates the unpredictable adventure that is life, with all its ups and downs, the changes we grow from, and the silver lining on the horizon. It is a tribute to trust and acceptance of the journey ahead; at times of uncertainty, you can always find a way back to the centre, where the wild person in you will go.

With dreamy vocals and driving tribal rhythms, I hope this song makes you want to run, to dance and twirl at the top of a snowy mountain. The eclectic folk style that combines musical genres and cultures brings together sensitivity and strength with a catchy melody fused with hope.

The song itself has undergone many changes from the original version played on acoustic guitar. It is one of the songs from the album that has changed the most and I am really happy with the outcome.

My sister and I worked hard on a music video to capture the magical energy of this song, with choreography in snowy landscapes at the centre of the imagery. Filmed in the Luberon region of the south of France, the video celebrates all wild things and the beauty of human bodies in a natural landscape. 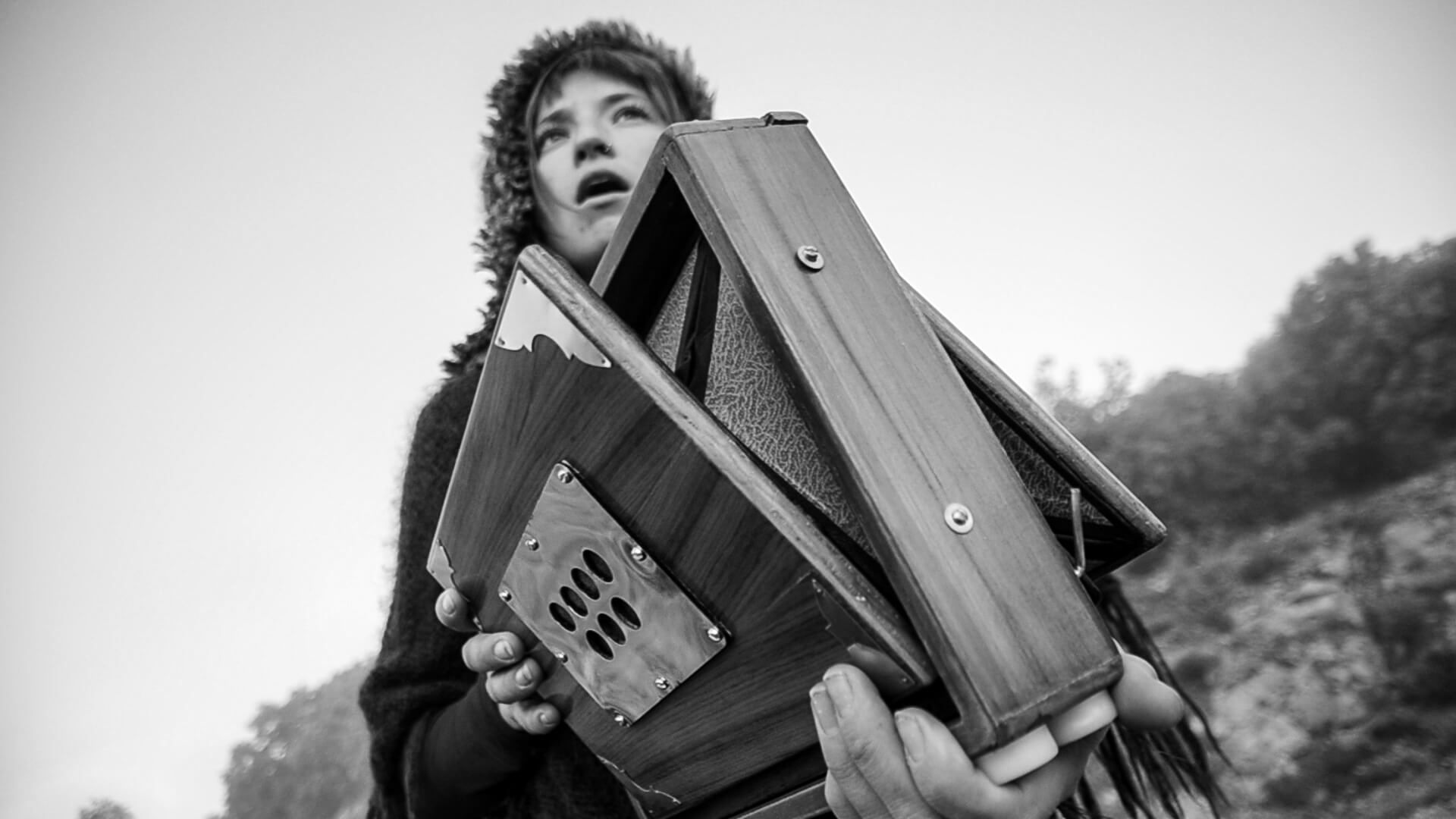 Chloe Levaillant is a French-British singer - songwriter and performer. Born in London, she spent the early part of her childhood in England before moving to France, where she is currently based. Chloe has been writing music for eight years during which she has developed her own unique folk sound. She has written and produced two albums and will be releasing her third self produced album later this year. Chloe’s journey as a songwriter and performer has been informed by her journey with street performance and the places it has allowed her to travel to and explore. After a degree in performance art at the Royal Conservatoire of Scotland, she graduated from California Institute of the Arts with a Masters degree in music in may 2019. She has performed in venues such as the troubadour, Redcat and human resources in Los Angeles.  Alongside music, Chloe is a passionate high liner and lover of all things wild and free.

“Chloe Levaillant is a French-British multi-talented musician, creative and teacher who sets the standard in indie-folk 2020 with a song that is simply perfect.” -   Llewelyn Screen, A&R factory

“Chloe Levaillant has offered an antidote to breezy expression with her artful passion-steeped soundscapes. As a singer, songwriter, multi-instrumentalist, and composer, Chloe Levaillant makes her poignant singles come alive in just the way she intended.” - Amelia Vandergast, A&R factory

“Where the wild people Go is a song that exhales hope for me. The song itself changed a lot from its original form, making it one of my favorite songs from the album, because it is so different to what I am used to writing. I feel like it opened up a whole new world of music for me that I am excited to explore more.” - Chloe Levaillant

The creative process behind skywalker

My writing process varies and has developed over time. I always start by writing the skeleton of the song; the chord progression and the lyrics. Sometimes I write one before the other, other times I’ll write both at the same time. I played the songs in the streets for the public as they developed, allowing them to marinate and allowing me to connect more and more to the music I was writing. It was only very late on in the process that I sat down and wrote out the orchestrations for the different songs, but the ideas had been there all along. I wanted the album to be fully acoustic so I found my favorite musicians at California Institute of the Arts to play my orchestrations and arrangements; Atticus Mckittrick on guitar, Tal Katz on cello, Sara Sithi-Amnuai on flugelhorn and Ben Scanlan on percussion. For the Root or the Seed, I asked the musicians to improvise as it is a song that we had played together live on multiple occasions, resulting in a joint arrangement of the song. All guitar arrangements were written by Atticus Mckittrick for himself to play as I know that I could never write a guitar part that is as beautiful and fluid as what he writes for himself. We are connected on many different levels, and music seems to be one that requires nothing else, it always just seems to work perfectly.

The recording process of the album was long, difficult and full of learning curves. I decided to record the album in the last couple of months of my masters degree at CalArts before losing access to the studio’s for ever. So swamped with final projects, commitments I had already made and visa paperwork to ensure that I could stay in the country, I was determined to walk away from my masters degree with a new album, applying the knowledge that I had learnt during my time there. As there was little funding for the project I ended up doing all of the sound engineering myself. I had taken one recording class whilst at CalArts but I was no technological wizard and I ended up wasting hours in the studio trying to trouble shoot problems I had no idea where to even begin with. I learnt about various things to do and not to do as I went along and ended up having to rerecord multiple tracks due to my own errors. With two weeks of school left to go, the recording process was almost complete and I was ready to start mixing. Then one Friday evening I went into the studio to find that both the main drive and the back up drive for the studio had been completely wiped - Make sure you always double back up your work! I have still not found out what the cause for this was.

At this point it was crunch time. I had some of my sessions backed up on an external hard drive but in the hurry and flurry of everything I had forgotten to back up some of the sessions properly. I lost some of my work and had to start rerecording the tracks I had lost. At this point it was clear to me that there was no way I would be able to do all the mixing in time for graduation. I outsourced the work to Chloe Scallion, an incredibly competent music technician who had always been willing to lend a helping hand when I ran into technical issues in my projects at school. She did an incredible job of enhancing  the organic nature of the music and paid close attention to detail.

Three years later from the initial start of the project it is complete and I am excited to share the hard work that has gone into it with the public.

The making of Skywalker began in June 2016 and it is coming into full fruition this June 2019.

One evening after busking in Glasgow where I was attending university at the time I went and bought a ukulele. I had been living in the city for over a year at the time and music was my salvation in the dreary, wet, Scottish weather. I started songwriting on guitar but my lifestyle was gradually becoming more and more nomadic. I spent less time at home and more and more time walking around the city, hitting up my favorite busking spots, staying on friends’ couches and catching the rare glows of sun light in the parks. I switched to a smaller instrument to cut down on some carrying weight and was overjoyed to find that through this new instrument I was able to develop a completely new musical aesthetic.

During the summers of my time attending university in Glasgow I would go back home to visit my family In France before taking off with my backpack to busk across Europe. I started to become more involved in mountain sports such as high lining and climbing and the instrument switch was very welcome when it meant hiking up into the mountains with a lighter, more manageable load.

The name of the album comes from one of the songs. The song Skywalker was written  after my first attempts at high lining, a sport in which you rig a piece of one inch webbing between two cliff faces (or anything tall enough) and you try to maintain enough balance and focus to walk across it. You are always attached by a leash going from your harness to the webbing, so that in the event that you did fall, you would take a swing in the air but would not fall to your death. I remember the very first time that I walked across a high line. The moment you stand up, your legs shake and everything in your body and your mind tells you that it is wrong to keep going. But there is a split second of calm and concentration when your mind becomes silent the vast emptiness below your feet pushes you forward. You are able to grasp hold of  the reality of where you are and just walk - in the the sky. The wind on your cheeks, the sunlight in your hair, the lightness of your feet, the breeze coming up from below and the birds soaring beside you all bring a different sense of calm and freedom and it is in this moment that my fear can only bow down to my self.

The album as a whole reflects this; the ability to look at fear in the eyes and not only embrace it but overcome it, whether it be fear of dying or living, of falling in love, making big life changes, taking chances or simply being human. The songs come from a place of honesty, observation, fragility and strength, written at a time of transition and change, whilst falling head over heels in love and finding my life and musical partner Atticus Mckittrick. They reflect the nomadic lifestyle that I adopted since leaving home, as well as the growth and changes I experienced as a young adult. Skywalker is about diving head first and full force into the alternative to the beaten path and not looking back.